The main aspect of this investigation is the fast calculation of jet breakup from incoherent, shaped charge effects on targets.   Several examples are used to verify force protection with hard kill – active protection systems (HK-APS).  The first example showed how SC3D can be used to estimate the rolled homogeneous armor (RHA) equivalence of a layered armor recipe against a shaped charge threat at standoff.  The RHA equivalence can then be used in traditional vulnerability assessments.  In the second example, a stochastic analysis was done of an early initiated normal jet event against a target vehicle to evaluate occupant survivability.  Although Monte Carlo was used to calculate vulnerability, this was representative of a singular, deterministic HK-APS intercept of a threat (Pk given an intercept).  In the third example, an additional layer of stochastic analysis evaluated probability of intercept, accounting for circle error probable of a threat as it is intercepted by an APS along a protection hemisphere.  The resulting Pk is therefore that given a launch.

SURVICE Engineering Co. has been involved in exploring active protection systems (APS) for the United States Marine Corps.  Under an internal research and development effort, recent improvements have been made to SC3D, a SURVICE-developed, shaped charge analysis code. The penetration model in SC3D follows in the line summarized in Hazell [1], as well as other references.  In order to assess an effective hard kill (HK) – APS, a performance metric of the amount of residual damage when the HK-APS engages the threat with its explosive countermeasure (CM) [2] needs to be understood.  Ideally, the CM neutralizes the shaped charge using blast effects.  In less-than-ideal circumstances, one of a number of outcomes can occur that can still produce a jet.  The deadliest event is when the warhead initiates normally upon impact without being damaged by the CM.  Another potential event, often observed in HK-APS testing, is when the warhead initiates normally at the CM intercept standoff with no damage to the warhead and produces a normal jet.

This outcome, called early initiation with normal jet (EINJ), is what we will focus on.  Understanding residual damage from EINJ directly leads to quantifying ground vehicle vulnerability and force protection on a combat ground vehicle that implements HK-APS.  Tools such as AJEM, COVART, and TurboPK rely on computational ray tracing through shielding, armor, or vulnerable components to determine vulnerability.  While work has been done to characterize EINJ on rolled homogeneous armor (RHA) [3], using SC3D to characterize EINJ on vehicles that have composite armor systems other than pure RHA, like the amphibious combat vehicle and Stryker, is a stopgap available right now, as RHA equivalence must be determined for those more exotic systems.  One would think that this gap could be filled by hydrocode, but by its very nature, modeling the incoherent jet associated with EINJ is imperfect.

SC3D analytically models the radially-expanding jet phenomena, the effects of which are pronounced with EINJ against light composite armor.

In this article, a hypothetical composite armor is investigated for residual damage effects as a function of standoff.  SC3D automatically tabulates probability of penetration over a range of standoff and over a range of armor fallback angles.  In each condition, the number of Monte Carlo runs can be specified.  During a parametric run, SC3D provides visualization of resulting craters and penetrations on the target from the jet particles.  An additional feature is the capability to run animation of a specific problem case.

The following steps can be taken to determine the RHA equivalent of a composite armor recipe:

Once the RHA equivalence has been found, traditional vulnerability assessments can be done.

For this example, a hypothetical light composite armor comprised of four layers is analyzed to determine RHA equivalence (Figure 1).  This example is not meant to be an optimized armor solution.

The shaped charge of interest is nominally 80 mm in diameter; geometry is entered as piecewise input, along with other parameters (Figure 2).  The statistical range of particle tumble velocity and particle drift speed is set in the threat input.  Shaped charge behavior is quickly calculated, particularly jet breakup and tumbling characteristic of incoherent jet formation, in addition to usual properties such as penetration vs. standoff. 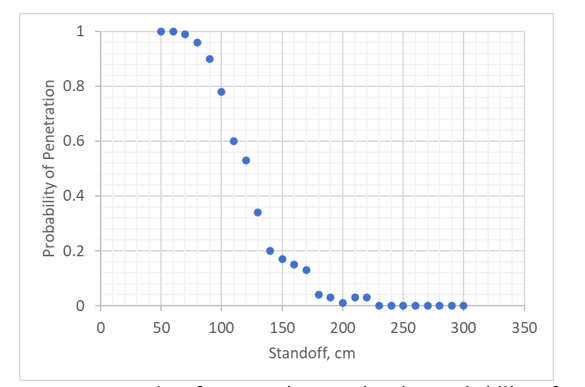 Figure 3:  Results of Parametric Run Showing Probability of Penetration as a Function of Standoff for a Hypothetical Armor Recipe.

When doing a parametric study, SC3D will animate each case, marching through the chosen range of standoff and fallback angle.  Figures 4 – 7 show some graphics of the armor penetration.  The animation is chosen from one of the Monte Carlo scenarios, the number of which is user specified. 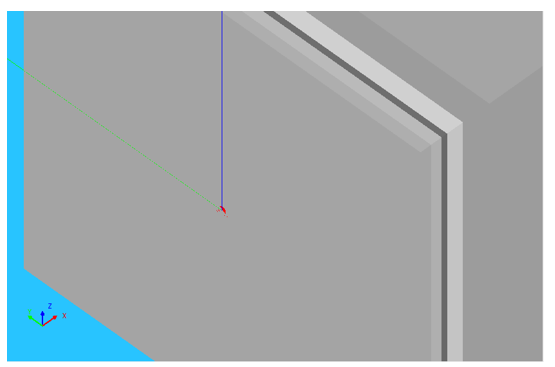 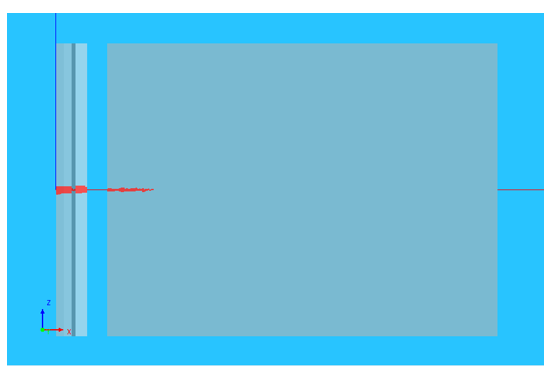 RHA equivalence was determined by iterating toward an RHA thickness that produced zero probability of penetration at the same standoff as the hypothetical armor recipe.  A second instance of SC3D was booted to do this, conducting runs where all input parameters were kept constant except the armor recipe, which was changed to just RHA.  The thickness of the RHA was changed, and the parametric analysis was run until calculations resulted in zero penetration probability at 230-cm standoff.  In this case, the RHA equivalence of the hypothetical armor recipe was 2 cm.

One can correctly presume that analysis can be conducted to optimize an armor recipe by areal density by trying different combinations of materials and corresponding thicknesses, leading to a desired RHA equivalence.

Using SC3D, vehicle occupant vulnerability from an EINJ event can be examined by setting occupants as vulnerable components.  A sample target vehicle geometry (BMP2) that includes occupants was analyzed to find level of force protection (Figure 8).  The threat was the same 80-mm diameter as in the previous example.

The shaped charge was set to initiate early at roughly 5 m from the vehicle, a likely intercept distance from an APS such as the Rheinmetall AMAP-ADS.  The jet is modeled to have broken up, particles tumbling with radial velocity.  A simple result is shown in Figure 9, where an occupant is struck.  The number of Monte Carlo runs was set to 50 in this example to obtain the result.  In this sample run, a component kill was set at 0.1 cm/µs, and no fault tree was implemented. 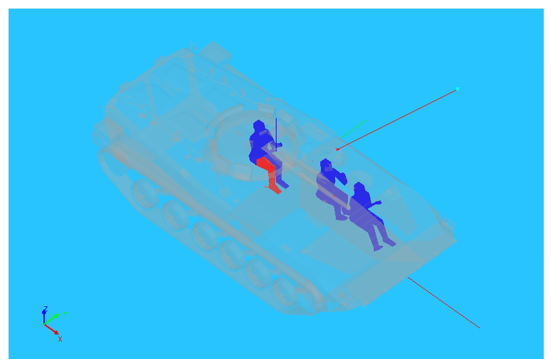 If it is desired to evaluate an armor recipe on a target component, then one would use the RHA equivalent.

This is a quantification of component Pk given a single hit (intercept).  To gain greater insight into Pk given a launch, SC3D has additional provision to stochastically analyze a scenario when a threat has been launched at an aimpoint on the target.  The method uses a Rayleigh distribution generating a circle error probable (CEP) on a hemisphere that is the assumed geometry of CM threat intercept.  The APS offers a “protection dome.” Given a launch and the inherent probability of the threat intersecting anywhere on the CEP, the Pk of vulnerable components can be calculated.

The following equation for the cumulative distribution function for a Rayleigh distribution contains one parameter – σ. One CEP is 1.17 σ.

At each probable intercept, a Monte Carlo is run among the Rayleigh distribution of intercepts.

With the same target and threat previously used, an aimpoint is selected, along with Az/El. Parameters associated with the statistical spread of where the threat might actually go vs. what was being aimed for (the CEP) are also specified (Figures 10 – 13). In this instance, owing to the CEP, standoff, and inherent shaped charge incoherence, Pk = 0. 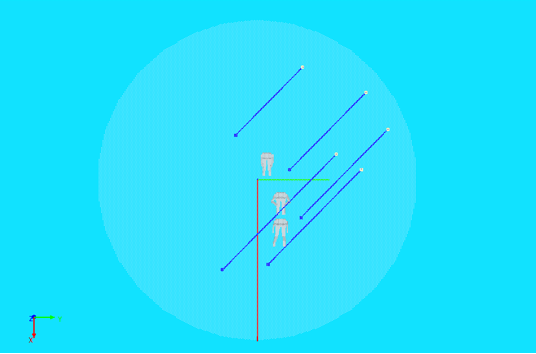 SC3D has been improved to calculate penetration against armor recipes that include fabric and ceramics.  Its capability lends itself to evaluating residual damage from the early initiated normal jet phenomenon that occurs when an HK-APS countermeasure intercepts a shaped charge threat.