Methods of wireless delivery of electric power have been discussed for over a century.  Only in the last decade have such systems been brought to reality.  Consumer devices to charge mobile phones and low-power devices within millimeters sell by the millions.  These devices rely on induction or resonant near-field coupling.  Technologies for longer distances, often referred to as “power beaming,” are still in the product development phase.  The general concept takes electricity from a point where it is plentiful and easily accessible (e.g., the power grid or a generator) and converts it into an electromagnetic field.  It is then “beamed” to a remote receiver that converts the electromagnetic power back into electricity.  The two main technologies for power beaming use either microwave/millimeter-wave frequencies or near-infrared lasers.  Compared to microwave beams, lasers have the advantage of much smaller apertures and no chance of radio frequency interference.  Although the examples and components discussed here will involve laser power beaming, the general arguments also apply to microwave power beaming.

The two main technologies for power beaming use either microwave/millimeter-wave frequencies or near-infrared lasers.

Figure 1 shows a schematic representation of a laser power-beaming system.  Electric power, sourced from the grid or a generator, drives a laser (via its own direct-current [DC] power supply), chiller, and control electronics.  The light is shaped by optics and then directed to the remote photovoltaic (PV)-based power receiver, where it is converted into electricity.  The PV electric output is converted and regulated via a power management and distribution system, which also handles recharging the device’s battery.

In the 20th century, lasers had very low efficiencies, and photovoltaic cells had not been optimized for monochromatic (laser) conversion.  Great improvements in the last 20 years have been made—increasing the top efficiencies for both components above 60% and resulting in end-to-end efficiencies greater than 20% (a huge improvement that has made laser power beaming useful for a growing number of applications).  Unfortunately, how efficiency is reported varies from group to group.  As this field grows, researchers, designers, and end users will need to make “apples-to-apples” comparisons.  In this article, we describe the audience for efficiency numbers and the factors affecting efficiency and suggest some ways for common reporting.

THE PROBLEM OF REPORTING EFFICIENCY

Historically, there has not been an agreed-upon definition of which elements to include and exclude when reporting efficiency for power-beaming systems.  There are multiple audiences for efficiency reporting, including end users, researchers, and system developers.  Researchers focus on component-level efficiency.  System developers care about the elements under their control, which might be a system or one or more subsystems.  End users and purchasers care about the complete, “all in” (also called wall-plug) efficiency because they need to know how much input power is required to deliver the target output power.

Focusing only on electrical efficiency misses the point of using power beaming for many use cases.

While we discuss how to report efficiency, it is very important to realize that focusing only on electrical efficiency misses the point of using power beaming for many use cases.  Every kind of power delivery has use cases where power beaming is the best choice, and others where it is not.  Grid-scale (multimegawatt) power delivery is not (currently) an appropriate use case for power beaming except for the most remote, extreme cases.  But there are numerous use cases in the 100–5,000-W  range (averaged over 24 hours) where efficiency is the least of the users’ concerns because of the inability or cost of running something like an extension cord.  Assuming an electricity cost of $0.10/kW-hour, delivering 5 kW remotely (at 20% wall-plug efficiency) would only cost roughly $2.50/hour.  Compare that cost to the time savings of personnel to change batteries, risk reduction when exposing Warfighters during a battery swap, and the benefit of increased sensor and communications coverage (e.g., from a “infinite” endurance unmanned aerial vehicle).

The efficiency of any single element is determined by measuring the power into the element and the power out.  The tools for measuring power include voltmeter and ammeter, a calibrated shunt resistor with voltmeter to measure current (instead of an ammeter), optical power meter, and multiphase electrical meter/digital multifunction AC transducer.  The efficiency measurement process is straightforward for components that have DC input and output.  It can be more challenging when converting between AC and DC or when converting between DC electric and optical power because of the differing uncertainties in the different measuring tools.  For example, a calibrated voltmeter may have an accuracy of ~0.1%, whereas a calibrated high-power thermopile optical power meter may only have an accuracy of 3%.

Net efficiency can be calculated by multiplying the sequential component efficiencies together.  Power beaming includes elements that require power but not in the direct power flow path, such as control electronics and a chiller.

The range of component efficiencies varies widely.  AC-to-DC power supplies can get as high as ~94% but often are lower, with 80% not uncommon.  Optical losses depend on the quality of coatings and polishing, with only 0.1% loss per surface achieved.  Lasers range from 35% fiber lasers up to 65%+ diode lasers.  PV cells also range from 25% up to ~70%.  Chillers have a coefficient of performance (CoP) that rates how much heat is transported away vs. the amount of input power.  Current chillers exist with a CoP as high as 2.5, which would mean that to remove a given amount of heat, the chiller would require 40% of that value in input power.  Work is being done on direct refrigerant cooling that could improve that performance significantly.  In any of these cases, ambient conditions (especially temperature) also have a big impact on performance.  Work on the laser side to reduce the amount of required cooling, which could allow a switch from chillers to forced air, is also being done.

A Sankey diagram is useful to visualize the flow of power.  Using example values, we will discuss the varying types of impacts (e.g., scaling linearly, constant, etc.) on efficiency of different factors.  Figure 2 shows an example power flow diagram using component efficiency numbers that are chosen from within ranges of published values.

There are a wide variety of options for what to include and not include in reporting an efficiency measurement. What should  be included in a reported efficiency number?  Those working on all or part of a power-beaming system are incentivized to publish a high number, whereas users and integrators desire accurate or conservative reporting (i.e., lower numbers).  Furthermore, developers may only focus on one or a few subsystems.

The factors in efficiency fall in three broad categories—those for which power loss scales linearly with power, those where power losses are constant regardless of power, and those that depend on uncontrollable or unpredictable elements.

The components whose power loss scales linearly (or near linearly) with system power include the laser, PV receiver, baseline (best case) air and optics losses, and power supplies.  Whether building a system to deliver 50 W or a different system to deliver 3,000 W, the current peak efficiency of diode lasers (or laser arrays) is still in the range of 60% (a 100-W laser would require 167 W of electric input, and a 4-kW laser would require 6.7 kW of electric power).

Some required components do not change noticeably in their power draw regardless of the power-beaming system scale.

Some required components do not change noticeably in their power draw regardless of the power-beaming system scale.  These are listed under “control electronics” and include system controls, UI, tracking electronics, and beam steering (the latter will scale with the size of the optics).

Finally, there are factors outside a system designer’s control.  These factors are mainly atmospheric—humidity levels, air quality, and elevation. Table 1 outlines four cases where elements would and would not be included in efficiency reporting. Case 1 would only include one or both of the major components, i.e., the laser and/or PV cells.  This case is most relevant to researchers doing fundamental work on improving one of those components.

Case 2 would include all elements in the direct-power flow from DC power into the laser to the regulated DC power out.  This case excludes the AC-to-DC power supply, chiller, and overhead electronics based on the perspective that those elements have widely-varying efficiencies.  A developer might have a laboratory chiller that works fine for testing with a variety of lasers but is  not efficiency-optimized for field  use.  This argument also applies to  AC/DC power supplies.  It can be more economical to use lab equipment that can handle a wide range of possible power levels instead of prematurely optimizing system components for which commodity modules exist for specific power levels.

Case 3 is similar to case 2 but adds in the chiller and removes the output power management elements.  Because a chiller is a significant part of the power usage (accounting for 10%–20% or more of the total power draw), it gives a better sense of system performance. Conversely, different customers will have different output power requirements (voltage level, allowed voltage range, etc.); therefore, a specific module should not be chosen for measuring efficiency.

Case 4 is the complete wall-plug-to-user-device-plug efficiency.  This case is relevant when customers need to understand how much power is needed for the power-beaming system.

Table 2:  Summary of Efficiencies Reported Under a Variety of Cases 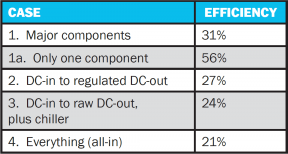 In an ideal world, a single calculation could be used to report efficiency, and everyone would report that calculated number for their work.  In reality, different audiences have different needs.  Researchers and developers will care about the “important” effects but not overhead, whereas end users will care about how much power they have to supply to use the device.  Therefore, we propose two options.

First, for published technical papers on system performance, we propose that system developers use the “DC- in to raw DC-out, plus chiller” method (with an option to call out the chiller efficiency separately).  This enables them to include only the conditions directly under their control while ignoring factors that do not scale with power levels.  Second, for specification sheets and research and development (R&D) proposals, we recommend that teams use the “everything (all-in)” method and state the conditions because end users need to know how much power to supply.  In all cases, it is fair to assume clear air, and the reporting should call out the loss due to a specific (stated) distance.  Regardless of how an efficiency number is reported, it is critical to clearly summarize what is and is not included.

As power beaming moves toward commercialization, more people and groups will be involved in specifying, reviewing, and purchasing systems.

We have seen how a wide range of efficiency values could be reasonably reported for the same system based on included factors.  As power beaming moves toward commercialization, more people and groups will be involved in specifying, reviewing, and purchasing systems.  It will be important for the industry to standardize common methods of reporting efficiency; otherwise, confusion from “apples-to-oranges” comparisons will slow down adopting this promising technology.  We recommend using the “DC-in to raw DC-out, plus chiller” efficiency method for research papers and the wall-plug (“everything [all-in]”) method for spec sheets and proposals.  Regardless of what method is chosen, clearly explaining what factors are included in the efficiency measurement is important!