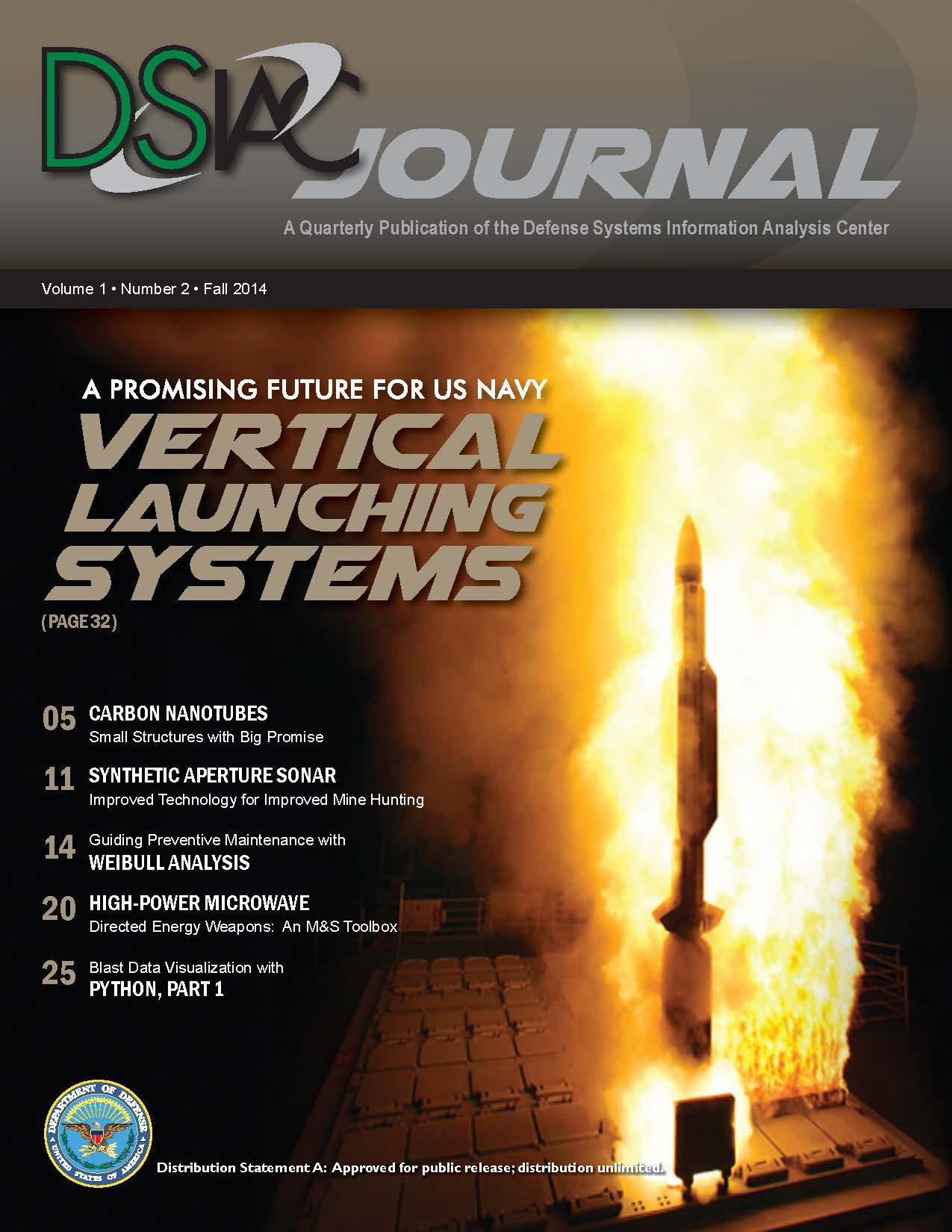 In an age of increasingly tighter DoD budgets and heightened acquisition scrutiny, leveraging successes has become more important than ever. One shining example is the U.S. Navy’s Aegis Weapon System. This weapon system, which includes the Mk 41 Vertical Launching System (VLS), has racked up a remarkable track record over the past several decades and appears to be poised for an even greater role in fleet protection and ballistic missile defense. In this fall edition of the DSIAC Journal, our feature Weapons Systems article presents a historical synopsis of the Navy’s VLS and provides a glimpse of emerging research and development (R&D) trends and the expanded roles this exceptional system will fulfill in the future.

In our Reliability and Maintainability article, Richard Wisniewski discusses the ability of Weibull analysis to guide many preventive maintenance decisions. This analytical approach is commonly used to make predictions about the life of a system for a given population by fitting a statistical distribution to life data from a representative sample. The parameterized distribution of data can be used to estimate important life characteristics of the system, such as reliability or probability of failure at a specific time, the mean life, and the failure rate. This article demonstrates how the application of this technique can provide a means for assessing the impact and consequence of a failure.

Also, John Tatum’s Directed Energy article provides an overview of a few modeling tools currently in use or in development that can help analyze a system’s vulnerability and the lethality of current and emerging high-power microwave (HPM) directed energy weapons (DEWs). There is a growing belief that DEW systems are most likely to change the way future battles are planned and fought. Thus, the importance of DEW modeling tools continues to grow as many of these systems edge closer to reality.

Finally, for those readers who might have a hard time grasping the invisible, Will Woodham’s Survivability and Vulnerability article is the first of a two-part series on visualizing blast data with the Python programming language. This article includes a few simple examples of code to help transform test data into color graphics. In next quarter’s issue, he’ll discuss how to generate 3-D animations. So stay tuned.

A Promising Future for US Navy: Vertical Launching Systems

INTRODUCTION For the past 30 years, shipboard vertical missile launching systems have transformed naval warfare by providing continually evolving launch capability to respond to a myriad of theater-based threats. Unmatched in performance and flexibility, these…

PYTHON: SLITHERING REPTILE OR POWERFUL VISUALIZATION TOOL? Human tendency is to avoid or even fear what we don’t understand. All too often this avoidance/fear includes computer programming languages. And that’s unfortunate because with even a…

INTRODUCTION As defined in NAVAIR 00-25-403, Reliability-Centered Maintenance (RCM) is “an analytical process to determine appropriate failure management strategies, including Preventive Maintenance and other actions that are warranted to ensure safe operation and cost-wise readiness”…

Over the last 60 years, sea mines (such as those pictured in Figure 1) have reportedly been responsible for damaging or sinking four times more U.S. Navy ships than any other weapon system [1]. Furthermore,…

The unique physical, electrical, and molecular properties of carbon nanotubes (CNTs) cause them to be the focus of research for a wide range of applications.  While commercial application for CNT technology is a central driver…