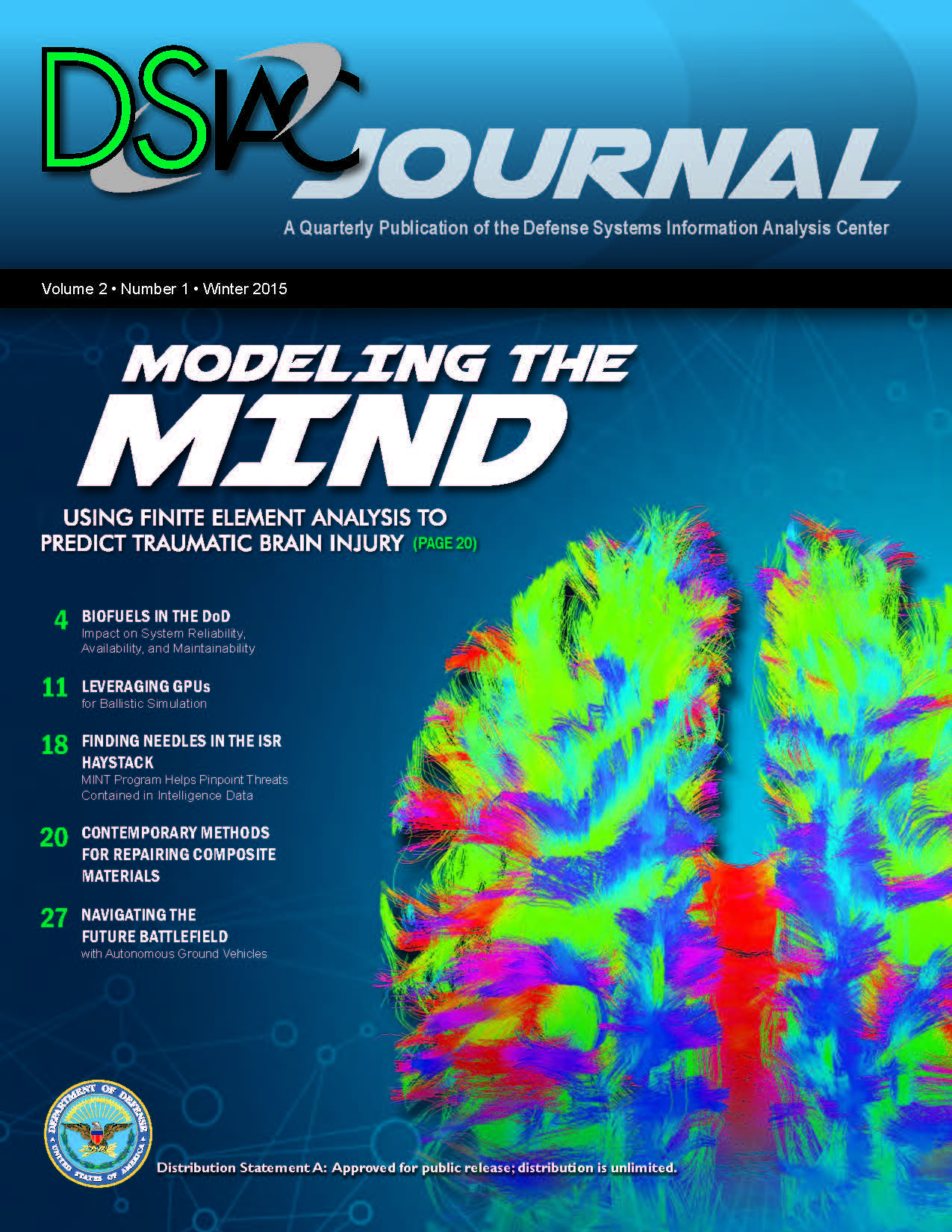 The widespread detrimental effect of traumatic brain injury (TBI) to military personnel— and, to a similar extent, professional athletes—has become increasingly evident, largely due to increased media coverage on this topic. While such coverage has certainly helped the public understand the nature of TBI, it is often still unclear how this phenomenon is affecting the general population. In reality, the clinical treatment of TBI has become so widespread that it is akin to treating an epidemic. In this winter edition of the DSIAC Journal, our feature Survivability and Vulnerability article by David Powell focuses on cutting-edge research that could lead to the development of methods with greater TBI predictive capability. Powell discusses empirical TBI modeling that could ultimately provide the means to predict not only the amount of cellular damage within the brain but also the cognitive effects that damage may have on an individual.

In a companion article, Brian Wessel briefly discusses one testing lab’s extension of its test technology/ methodology, which has been used primarily to support military personal protective equipment (PPE) development and certification, to likewise support the design and improvement of protective athletic equipment.

Also, with the Department of Defense (DoD) ranking as the federal Government’s largest federal consumer of energy (by far), the desire to reduce the military’s dependence on fossil fuels and increase the use “greener” renewable sources of energy is becoming a national imperative. In our Advanced Materials article, Alex MacDiarmid addresses the topic of biofuels and their impact on system reliability, availability, and maintainability (RAM) by examining the U.S. Navy’s plan to incorporate the use of biodiesel in the fleet.

Composites have long been another material of choice for Defense systems, especially aircraft, which require high strength-to-weight ratios. However, because of the intrinsic composition of composite materials, reparability remains an issue that must be considered for the system’s entire life cycle. In our Reliability, Maintainability, Quality, Supportability, and Interoperability article, Madeline McAuley discusses contemporary methods and considerations for implementing, maintaining, and repairing common composite structures.

In Joe Zinecker’s Autonomous Systems article, we learn how autonomous ground vehicles are navigating their way onto the battlefield, and we get an update on much of the recent progress that Lockheed Martin has made with unmanned vehicles, as well as a glimpse of some of its future plans.

Methods for finding the proverbial “needle in the haystack” is the subject of our Military Sensing article, wherein Chris Kennedy et al. describe ongoing efforts by the Georgia Tech Research Institute to improve the nation’s MultiDisciplinary Intelligence (MINT) system and to develop a method for prioritizing massive amounts of intelligence, surveillance, and reconnaissance (ISR) data.

Introduction Traumatic Brain Injury (TBI) is a serious concern for both the military and the general civilian population. In particular, blast-related TBI has been prevalent in recent military conflicts [1]. During Operation Iraqi Freedom, a…

Introduction Composite materials, especially those that exhibit high strength-to-weight ratios and thermal stability, continue to be of increased interest to the Defense industry. Materials researchers, vehicle designers/manufacturers, and other industry stakeholders are recognizing the potentially…

Introduction Ballistic vulnerability can be difficult to understand in a timely and accurate fashion.  Interactions between threats and targets are complex and unwieldy—and so are the codes used to simulate such events on an analyst’s behalf.  Typical…

Biofuels in The DoD: Impact on System Reliability, Availability, and Maintainability

The growing concern over U.S. energy security has prompted a number of Government initiatives intended to reduce the nation’s dependence on fossil fuels.  Regardless of one’s stance on the scientific feasibility of using biofuels as an economical alternative…

From the Battlefield to the Sports Field: Ballistics Test Lab Supports TBI R&D

Communications Manager Chesapeake Testing Traditionally a provider of ballistic and nondestructive testing of military and law enforcement equipment, Chesapeake Testing is a Maryland-based independent test lab that is now extending its reach into the sports…