Sometimes science fiction has a way of becoming reality. From Buck Rodgers ray guns to Star Trek communicators, many technologies that were once the realm of science fiction have worked their way into the real world in one form or another. And the Hoverbike will soon be added to this growing list of technologies, with the successful testing of a prototype (shown in Figure 1) revealing that the feasibility of the concept is no longer relegated to science fiction.

The idea of a Hoverbike or similar type of personal hovercraft is not new. The military has been testing various concepts for many years, including the HZ-1 Aerocycle of the 1950s (Figure 2) and the VZ-8 Airgeep of the 1960s (Figure 3). However, these concepts never made it into production. The Aerocycle, which was one of the first personal hovercraft developed for the Army, was found to be too difficult to control by untrained infantrymen and thus was abandoned after early failures. Likewise, the Airgeep, which used twin 400-hp Turbomeca Artouste IIC turboshaft engines, was eventually abandoned in favor of further development of conventional helicopters, although several successful flight tests were performed. 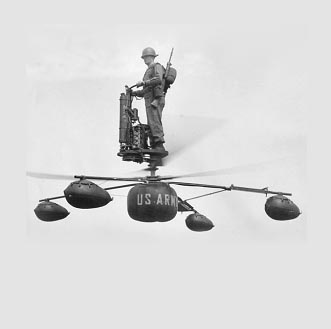 But a lot has changed since the 1960s. A technical revolution has occurred over the past several decades that has ushered in an age in which the Hoverbike can become a reality as a low-cost and safe means of transportation over virtually any terrain. Some of the key technologies that are available today but not when these concepts were first envisioned include the following:

The combination of the aforementioned advances and the proliferation of commercially available components in each of these technology areas has provided a good foundation to develop new vehicle concepts, such as the second-generation Malloy Aeronautics Hoverbike concept (pictured in Figure 4). The Hoverbike represents the culmination of years of developing and combining these technologies into a new class of vehicle. It combines the design of the original P1 prototype with fly-by-wire electric-drive quadcopter technology. Its increased stability and redundancy, as well as its unmanned operation, make it ideally suited for military applications.

BENEFITS OF THE HOVERBIKE CONCEPT

The second-generation Hoverbike concept implements all of the aforementioned advances in technology, while simultaneously incorporating survivability and reliability enhancements. Key features of the Hoverbike include the following:

Improved stability – The second-generation overlapping quad-rotor concept provides an inherently more stable platform than the original dual-rotor prototype, while maintaining ergonomic ingress/egress from the platform and providing shrouded ducting for protection to both passenger and vehicle. The unique and patent-pending overlapping rotor system is also an extremely stiff and efficient structure, providing additional payload capacity through weight savings and lower disk loading for the vehicle footprint.

Improved survivability and reliability – The Hoverbike, through multi-engine redundancy and an innovative augmented-yaw control system, is able to maintain controlled and stable flight should a single rotor fail. Redundancy at the system and subsystem levels and the ability to have emergency egress provide a unique capability for this new class of vehicle.

The Hoverbike’s increased stability and redundancy, as well as its unmanned operation, make it ideally suited for military applications.

Minimal training– The Hoverbike and its variants are designed to be low maintenance due to their simple and robust drive systems. The vehicle’s fully autonomous capability can minimize the need for training, as the flight controls can provide varying levels of pilot input augmentation.

Acoustic and radar signature – The Hoverbike has been designed to be a relatively small vehicle capable of safe, low-level flight. In addition to its small physical footprint and operation envelope (which is designed to be largely below radar), the Hoverbike features shrouded fans. The shrouds not only keep occupants and ground crew safe, but they also mask tip noise generated by the propellers.

Power generation –The multi-fuel-capable onboard generator can supply more than 70 kw of continuous power where and when it is needed. And when not being used for transportation, logistics, or surveillance, the Hoverbike can also provide useful onsite power.

Logistics – Using the autonomous capability of the Hoverbike allows simple waypoint-to-waypoint navigation by relatively unskilled users. And the small size of the Hoverbike and the safe shrouded propellers allow supplies to be delivered where needed, and without the need for a larger runway or clearing (as shown in Figure 5). The use of the Hoverbike platform as an unmanned asset purely for materiel transport is an attractive application in and of itself. Bypassing the need to put highly trained personnel and expensive aircraft assets at risk, the Hoverbike can shuffle supplies directly to military units in remote locations. 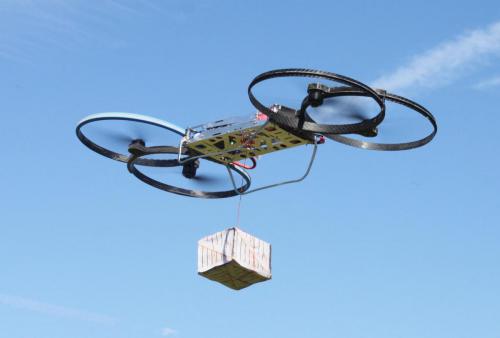 Under a preliminary R&D effort through DSIAC, a scale-model analysis of the Hoverbike concept and full-scale Hoverbike flight testing were conducted to evaluate the vehicle’s suitability as a Tactical Reconnaissance Vehicle (TRV) that can avoid improvised explosive devices (IEDs) by hovering over roadways or avoiding them altogether.

Several 1/3-scale models of the Hoverbike and proposed TRV concept vehicle were built and tested to evaluate vehicle ground effects, drive train and air flow efficiencies (as shown in Figure 6), terrain handling, and flight controls. These models were used as an initial test bed to experiment on during design and development of full-scale modifications/testing.

The effort culminated with the construction of the full-scale Hoverbike vehicle, which was flight tested in and out of ground effect to analyze performance, stability, and the functionality and efficiency of the drive system. Figure 7 shows a weighted mannequin on the Hoverbike being remotely controlled to test the vehicle stability and control algorithms.

The overall result/conclusion from the DSIAC effort is that the Malloy Aeronautics Hoverbike concept, at the desired objectives of 400 lbs and 800 lbs of payload capacity, is feasible, with no significant technical hurdles required to achieve these objectives.

The Hoverbike is a technology whose time has come. Just as smaller drones have seemingly invaded the airspace today, we may soon be establishing new “roadways in the skies” where this type of vehicle opens new avenues for logistics and transportation. Military commanders will have added flexibility in moving troops and supplies, and individual soldiers will have unprecedented personal maneuverability options. Furthermore, leaders of, say, humanitarian and emergency response efforts will have a new ability to move medical supplies and personnel into remote regions affected by earthquakes, hurricanes, and other natural disasters. Thus, we are now at a point where science fiction is poised to become reality, and the possibilities, like the skies themselves, are seemingly endless.