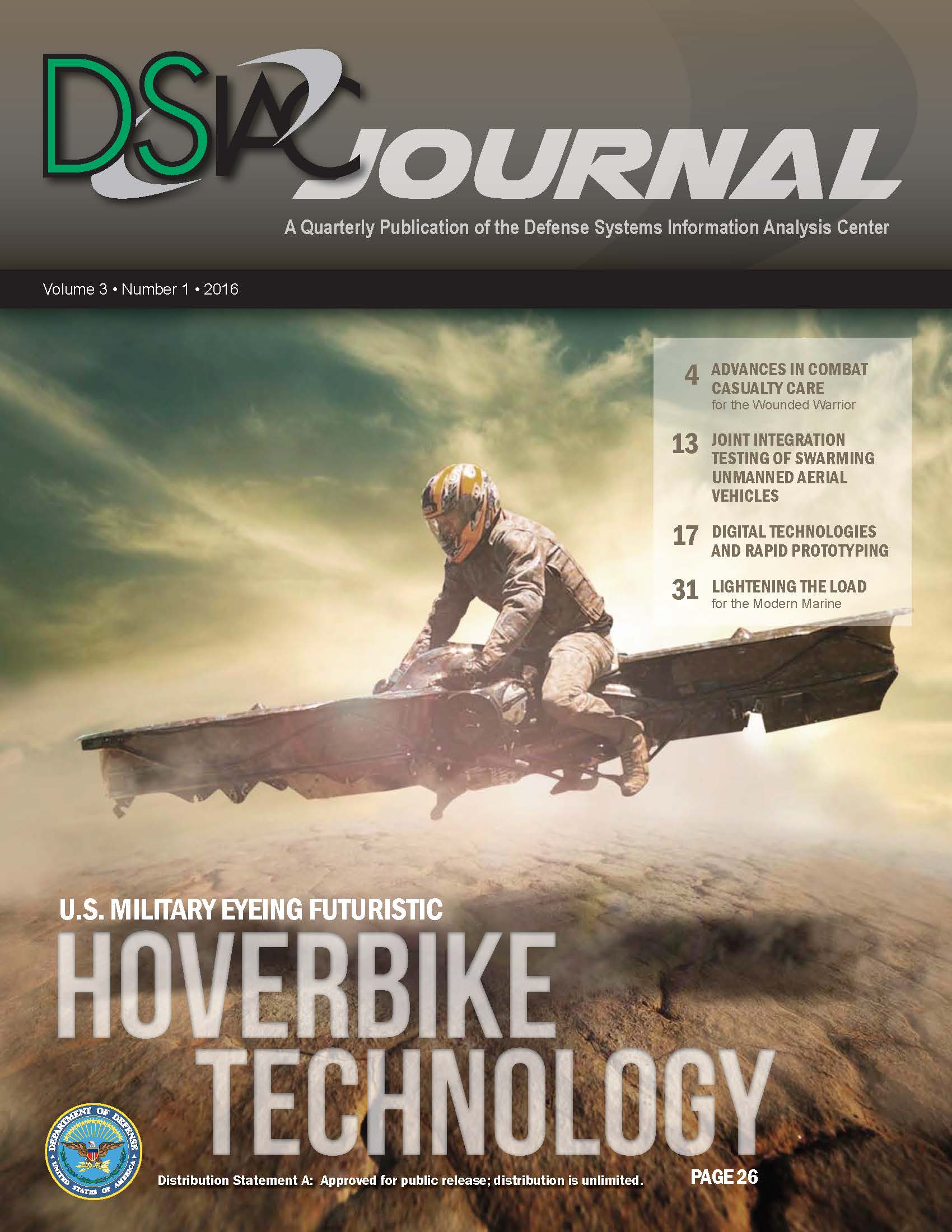 Oscar Wilde once opined that “life imitates art far more than art imitates life.”  And if one needed further convincing, he need look no further than the “technical” art of Leonardo Da Vinci.  How many of Da Vinci’s fanciful designs, which probably seemed preposterous at the time, are part of our everyday life today?  And in this age of rapid innovation, the notion that something can come into fruition in the real world that was inspired by creative speculative work only decades earlier is becoming a much more common occurrence.  In this issue of the DSIAC Journal, we discuss several such technologies that are at the forefront of the latest technological renaissance.

From “Avatar” to “Star Wars,” the concept of a terrestrial craft that can simply hover above the ground is commonly written into virtually every fictional action scene.  However, as authors Mark Butkiewicz and Chris Malloy discuss in our feature article on a new futuristic hoverbike, such technology is no longer relegated to science fiction.  And since this technology can be used with either an operator or autonomously, it holds great promise as a new mode of transportation.  The convergence of the new disruptive technologies that make the hoverbike possible will likely one day usher in a revolution in transportation that will be as disruptive to the transportation industry as mobile phones have been to communication.

In Greg Robinson’s article on digital technologies and rapid prototyping, he discusses how the current digital revolution, which is affecting almost every aspect of our lives, is also changing how we manufacture everyday items.  Many of the changes, such as our latest mobile phones and the emergence of driverless cars, are popular examples.  However, other changes that are much less visible are just as important and are having a profound impact on product development.  In particular is the emergence and popularity of digital three-dimensional (3-D) technologies, such as computer-generated solid models and additive manufacturing (3-D printing) techniques, which have greatly expedited the preparation of prototypes.  While subtractive manufacturing techniques, such as computer numerical control (CNC) milling and laser cutting, have made prototype generation faster and less expensive, advances in these technologies are not receiving as much recent attention as additive manufacturing.  But improvements in both of these technology areas are providing the ability to produce multiple iterations of cost-effective prototypes, which in turn has facilitated the development of exquisitely optimized manufacturing designs.  And the solid models that result from these designs are the beginnings of a “digital thread” that will provide an entire product’s life cycle from conception to design, manufacturing, and sustainment in a model-based engineering process that is increasingly being adopted by many DoD and related organizations.

Advances in materials are not only being developed to invent new technologies; they are also being developed to help restore people as well.  Jake Montez presents an account of a future wounded warrior as he discusses the emerging new technologies that are becoming available to save lives and restore human operability.  Additionally, a companion article traces the fictional path of a future warrior’s combat injury and treatment, including how additional advances in medical technology will be used to repair recoverable injuries and replace limbs that are not recoverable.

While advanced materials continue to demonstrate improved performance with reduced weight, dismounted Warfighters are considerably less effective when saddled with 190-lb loads and excessive power requirements for their equipment.  Capt. Anthony Ripley’s article on load lightening discusses how the Army is addressing current material and power limitations with a novel Soldier as a System (SaaS) concept.  This systems engineering approach ensures that several critical requirements be considered, such as the maximum weight an individual through a company (as a system) can carry, as well as individual- to aggregate-unit-level power requirements.

Finally, the article by Patrick Filbert on penetrating the ever-increasing defensive perimeters of our adversaries, also known as the anti-access/area denial (A2/AD) environment, discusses research and development efforts to plan, integrate, and synchronize the effects that can be delivered by unmanned aerial swarms.  The article further discusses how recent and future test events will be used to refine the concept of employment, which is critical for the development of requirements and Joint force integration capability.  This new technology is critical for shaping fourth- and fifth-generation strike platforms.

INTRODUCTION Sometimes science fiction has a way of becoming reality. From Buck Rodgers ray guns to Star Trek communicators, many technologies that were once the realm of science fiction have worked their way into the…

Lightening the Load for the Modern Marine

The current digital revolution is affecting almost every aspect of our lives. Many of the revolutionary changes, such as our latest mobile phones and the emergence of driverless cars, are obvious. Other changes, while much…

INTRODUCTION As technology improves, so does the capacity to expand a defensive perimeter to ever-increasing ranges, both horizontally and vertically. Identifying ways to penetrate this perimeter with assets and capabilities that do not require increasingly…

Advances in Combat Casualty Care for the Wounded Warrior

With recent advances in medical technology and combat casualty care, today’s wounded warrior (such as the one discussed in the companion article, “An Account of a Future Wounded Warrior,” on page 5) is being supported…