Can metamaterials (charged/active or otherwise) be used to shield a friendly radar from electronic attack while simultaneously allowing that radar to continue to operate in that same band?

Defense Systems Information Analysis Center (DSIAC) was asked if metamaterials (charged/active or otherwise) could be used to shield a friendly radar from electronic attack while simultaneously allowing that radar to continue to operate in that same band. DSIAC subject matter experts from Texas Research Institute and the Missouri University of Science and Technology provided initial answers to this question. Initial results show that some research is being conducted in the high-low terahertz range, and a few references indicate that research is being conducted in the lower-gigahertz range. Much of the published work is from China.

The inquirer was interested in the use of metamaterials in a military application in which a radar could track a target with minimal or no susceptibility to in-band enemy radar jamming. Obviously, some level of frequency agility of the friendly radar is necessary to select a slightly different carrier than that of the attacker. However, could the use of metamaterials be a simpler and less expensive way to shield radar than the very agile radars employed by premier fighter aircraft today? The inquirer asked if there was research on employing a material activation timed with a pulse repetition interval similar to the way WWI machine guns were geared/timed to avoid shooting their own aircraft’s propeller.

In an alternate application, could friendly aircraft radar-warning receiver (RWR) antennas be selectively shielded while the host aircraft’s electronic protection jammer is operating on the target frequency? This shielding would be limited such that the RWR could still detect, e.g., the enemy surface-to-air missile, but would not itself be jammed by the friendly electronic countermeasure. Most aircraft employ physical distancing of electronic attack/electronic protection transmission antennas and RWR antennas, along with solid surface shielding to accomplish this effect today. Operators are forced to accept temporary system degradation while jamming. But could a metamaterial EMI filter be employed to allow for antenna proximity or for potentially using the same antenna without being subjected to friendly jamming?

This question was posed to the presenters of the Electromagnetic Interference (EMI) Shielding/Materials webinar presented by the Defense Systems Information Analysis Center on Thursday, 26 August 2021. The inquirer was initially asking about a shielding material that could operate similarly to a one-way valve. In other words, could it filter a frequency inbound, but allow it outbound?

The ability to transmit electromagnetic (EM) waves through a medium without the waves entering back into the transmitter (a one-way filter) is an active research topic. The most likely solution to this problem is via the use of metamaterials.

A metamaterial is any material engineered to have a property that is not found in naturally occurring materials. It is made from assemblies of multiple elements fashioned from composite materials such as metals and plastics. The materials are usually arranged in repeating patterns, at scales that are smaller than the wavelengths of the phenomena they influence. A metamaterial such as that shown in Figure 1 derives its properties not from those of the base materials, but from its newly designed structure. Its precise shape, geometry, size, orientation, and arrangement give it its smart properties capable of manipulating EM waves (i.e., by blocking, absorbing, enhancing, or bending them) to achieve benefits beyond what are possible with conventional materials. 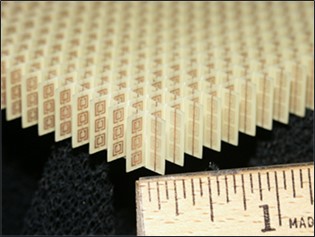 Research into the use of metamaterials for radar shielding appears to be in the initial stages. A subject matter expert in the field of metamaterials, Dr. Kristen Donnell of the Missouri University of Science and Technology, stated that it is likely that metamaterials and/or frequency-selective surfaces could be used to provide a unidirectional response, but that little if any work has been published for the frequency ranges commonly used for radar. (See Table 1 for a discussion of the different frequency ranges available.) However, metamaterials are being used as unidirectional filters for much higher frequencies (approaching the terahertz [THz] range).

In 2017, Zang et al. [1] reported on broadband unidirectional behavior of EM waves via “transformation optics.” Li et al. [2] describe the use of a tunable, graphene-metal hybrid metamaterial for use as a unidirectional light transmitter (THz range; supported by the Government of China and the National Science Foundation). Another work (Yang and Lin [3]) discusses metamaterials for tunable, optical-frequency filtering (lower-THz or high-gigahertz [GHz] range, funded by the Government of China). Han et al. [4] discuss the use of a dual-band metamaterial to allow unidirectional, reflectionless propagation (funded by China and Korea). Yang et al. [5] reported one-way, helical EM wave propagation via a magnetized plasma within a microwave regime, although this plasma may not be considered a metamaterial.

There may be research being conducted on millimeter-wave and higher-wavelength EM unidirectional transmission via the use of metamaterials, but this work is not being openly published. Up to this point, there has been no evidence that such an activity is impossible using metamaterials. Updates on applications of a unidirectional EM technology are currently unavailable from open sources owing to the vast majority of the work still being within the basic research regime.