What systems are available for swarm drone missions to detect, locate, and potentially modify aerial radiation in real time?

The Defense Systems Information Analysis Center (DSIAC) was asked to locate systems for swarm drone missions and pattern analysis for radiation detection. DSIAC searched open-source documents for relevant information and contacted subject matter experts (SMEs) from the U.S. Army and Georgia Tech Research Institute for additional information. The inquirer was put in contact with an SME from the U.S. Army Combat Capabilities Development Command Armaments Center to discuss the inquiry in further detail. DSIAC compiled the requested information into a response report that was delivered to the inquirer.

In 2016, the Edgewood Chemical and Biological Center (ECBC) tested an integrated system of chemical and biological sensors on a quadcopter drone, named Deep Purple, at Dugway Proving Ground’s West Desert Test Center in Utah. Deep Purple drones utilize Array Configurable of Remote Network Sensors (ACORNS) affixed to their underside. They can carry a payload of sensors up to 5 lb. The sensor package includes the Tactical Biological Generation II (TACBIO 2) detector, which rapidly detects the presence of an airborne biological threat, and the joint chemical agent detector (JCAD), an automatic chemical warfare agent detector [1].

Deep Purple is made of commercial-off-the-shelf parts developed in partnership with the Johns Hopkins University Applied Physics Laboratory and the Defense Threat Reduction Agency (DTRA). ECBC used three-dimensional printing for a variety of parts, including hollow arms holding the propellers housing internal wires and an airframe using circuit boards rather than functionally inert carbon fiber to allow direct, real-time communication between the payload and drone operator. The information provided by the sensors can be passed on to soldiers in the field and/or command control up to 2 miles away [1].

Deep Purple uses a light detection and ranging standoff detector to identify a plume of particles in the air that are potentially harmful. The detection triggers a layered sensing system to autonomously launch in the Deep Purple drone carrying the ACORNS detector. The drone flies to the plume, samples the air, and reports the findings back to decision-makers in real-time [2].

Georgia Tech Research Institute (GTRI) is working with DTRA, ECBC, and the U.S. Air Force Research Laboratory on a program called Lethal Doormat. GTRI is putting their swarm technology on U.S. Army Deep Purple drones. This version of Deep Purple drones continues to utilize the modular sensor attachment ACORNS, with one of the suite sensors being a chemical detection module (CDM).

Phase 1 of Lethal Doormat autonomously flies four Deep Purples with CDMs through a chemical plume to collect concentration measurements, which are used post-flight to approximate the plume source location. The autonomous behaviors include launch, coordinated flight, and recovery.

Phase 2 of Lethal Doormat, which is unfunded and not yet started, will test autonomously flying four Deep Purples with CDMs through a chemical plume to react to the chemical concentrations in real-time and onboard the UAVs. The key difference here is the autonomy will interact with the CDM readings and make decisions about where to fly based upon the CDM readings [4].

TACBIO 2 is a biological aerosol sensor designed for continuous ambient air monitoring that can warn of potential biological attacks. The instrument samples air at 1.0 L/min and uses an ultraviolet light-emitting diode light source to illuminate aerosol particles. Particle fluorescence and elastic scattering are measured and used by the TACBIO 2 algorithms to determine the presence of biological particles. The TACBIO 2 can be mounted to UAVs to detect the presence of biological threats [5].

The JCAD M4A1 (Figure 2 [6]) is a pocket-size, rugged handheld detector that automatically detects, identifies, and gives out alarms to chemical warfare agents and toxic chemical vapors. The system can be used on UAVs, at fixed sites, and on individuals. JCAD provides instant feedback of the hazard with real-time detection of nerve, blister, and blood agents. The development of the JCAD was funded by the Army Technology Objective Program, ECBC [6]. 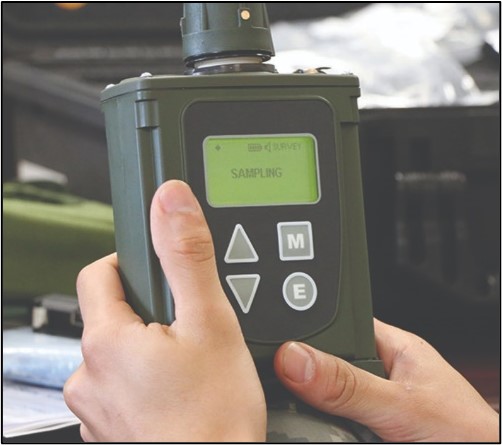